Commissioned by the City of Philadelphia Mural Arts Program and in partnership with Hidden City Philadelphia and Rowhouse Spirits, 2015

Throughout the century following the United States Civil War, Philadelphia was known as the “Workshop of the World.” The city was a manufacturing powerhouse, with thousands of small- and large -scale facilities populating a wide range of industry—a reflection of Philadelphia’s entrepreneurial spirit. During this heyday, a complex and self-sustaining ecosystem emerged, supported by a vast network of working relationships within and across trades. This depth and diversity of production sustained the health and longevity of Philadelphia’s industrial base, far surpassing many other North American cities.

Regardless of its early strength, Philadelphia’s manufacturing economy experienced an inexorable decline during the second half of the 20th century. Left behind were the enormous and often magnificent physical remnants of that disappearing city. As the city has redefined itself in recent decades, many of these historic structures, including mills and factories, have been repurposed for adaptive and imaginative reuse. A few have survived outright, having successfully adjusted with the times. Many others stand underutilized or forgotten, subject to scrappers, squatters, and nature’s decay.

Industrious Light honors the city’s proud industrial history and prompts discourse around its present-day impact. The mural was created largely in charcoal, a throwback to “black and white” perceptions of the past and a reference to the primary materials of the industrial era. This is the second work in the Industrious Light series, and continues the dialogue of Philadelphia’s brewing history. The mural is located at the former Weisbrod & Hess Oriental Brewing Company, and the current home of the Philadelphia Brewing Company (PBC). The mural wraps the facade of Rowhouse Spirits, a newly opened distillery located directly in front of PBC. The mural depicts the relationship between brewing and distilling through the depiction of the industrial materials common to both. The front of the building speaks more to distilling and the back to brewing. 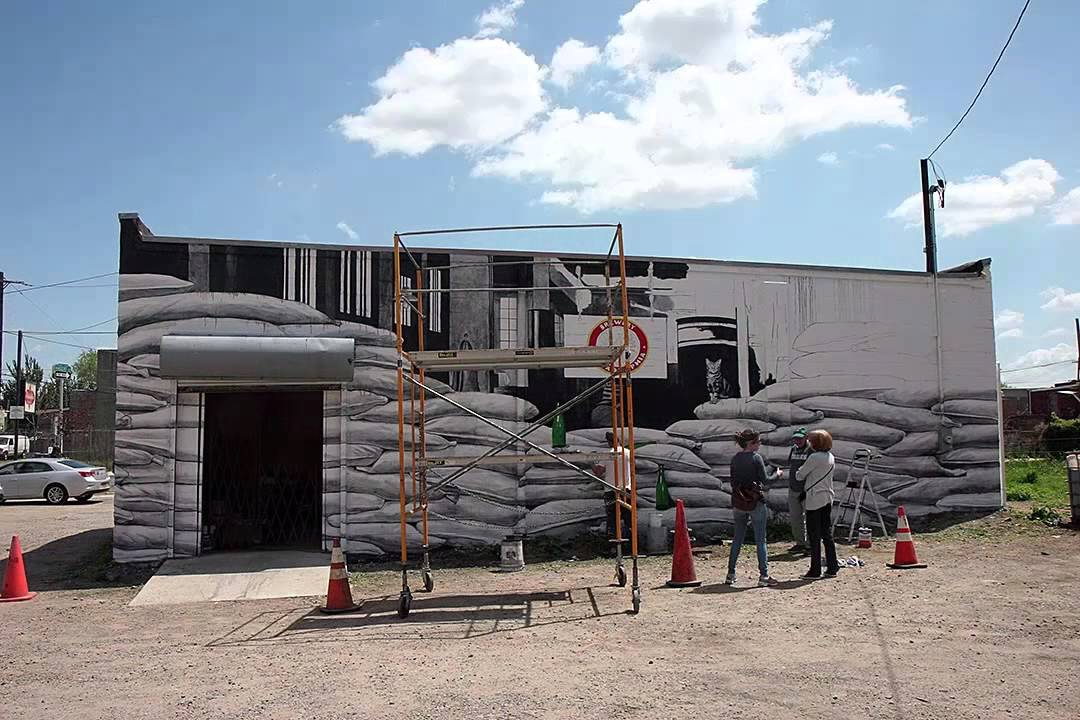